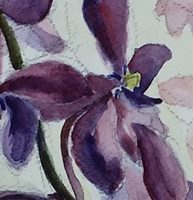 Singapore is known as The Lion City (Singapura was the older name and “singa” means lion). But we are also known as The Garden City (a term coined by our government back in the 1960s as part of its post-independence vision of creating a beautiful and liveable island-city.

We have quite a history when it comes to orchid cultivation, with many new varieties created each year. There are more than 120 orchids named after VIPs including the tough looking Dendrobium Margaret Thatcher, the pure white Dendrobium Princess Diana, and the Paravanda Nelson Mandela.  Our national flower is the Vanda Miss Joaquim. (You can read more about our National Orchid Garden located on the grounds of our beautiful Singapore Botanic Gardens.)

Orchids were found in many home gardens in Singapore. I am not so sure if it still true as few own homes with a garden now. My father used to plant many orchids. Here is a picture of me at about 2 years old having a fun time in the garden – you can see the orchids that my father planted just behind me.

As I grew up with orchids blooming in my face, I never really appreciated their beauty until later in life as imported flowers such as roses, carnations and tulips seemed much more exotic. What a mistake – to think that the grass is greener on the other side, and that the flowers in someone else’s garden are more beautiful than those in mine. It robs you of the joy in your midst.

There’s actually something quite sexy about orchids, don’t you think?

Teacher took pains to arrange the orchids, even dropping a lone orchid artfully for creative effect. 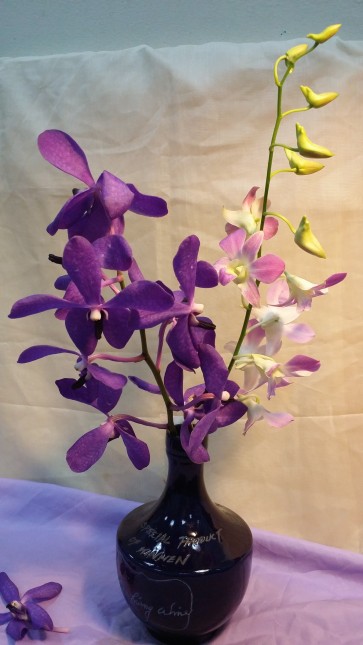 The completed arrangement. The Aranda has such a lovely shade of deep purple.

But alas, I did not plan well and could not squeeze everything in. I was silently kicking myself for bringing two stalks of orchids instead of one. There were just too many flowers to draw! Too bad for teacher’s lone orchid.

My not-so-complete painting. I painted the white & mauve Dendrobium first so it is light and a bit tentative, and tried to be bolder when approaching the Aranda. I may have been too heavy handed with one and too light handed with the other. Hence, the uneven results. As you can see I didn’t care about the damn bottle : )

Oh I just have to add this in. Look at this gorgeous painting or orchids! I took this picture from Wikipedia. It’s a lithographic colour plate from Ernst Haeckel’s 1899 book called Kunstformen de Natur. He’s a polymath (like so many people were in those days) – a physician, biologist, naturalist, philosopher, artist…multi-talented. I am so jealous.